Get to Know… Julie Jacobson

Get to Know… David Jacobson

Holder: Officers from US, Canada will work on cross-border investigations [AP]

US envoy says trade with Canada is top issue [AP]

Strong Cdn dollar not only reason for shopping in US [CBC]

10 reasons why the Keystone pipeline will be built [National Review]

Border agent says there’s nothing to do, money is being wasted [CNN]

Schumer calls on Feds to move ahead with joint border crossing [newzjunky.com]

Hampson: 9/11 and the Remaking of Canada [iPolitics.ca]

How Canadians get access to US-only deals [Globe and Mail]

Is the US ready for Little Mosque on the Prairie [BBC]

Canadian dealers get ‘carve out’ from US regulations [Financial Post]

McKibben: What comes next for oil sands action [grist.org]

Are Canadians growing apathetic about the oil sands? [Huffington Post]

Premier Alward: What New Brunswick can learn from Arkansas 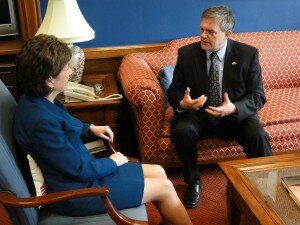 The premier of New Brunswick, David Alward, was in Washington, DC over the weekend and on Monday to meet with US governors, Maine senator Susan Collins (in photo above), and business leaders. Below is our conversation about the meetings.

Q – Over the weekend in Washington you met with the New England Governor’s Association, and had a meeting with the governor of Arkansas, Mike Beebe. What did you talk about?

A – New Brunswick has had recent exploration taking place and it looks very promising for development of shale gas. Because of that we have different companies working in New Brunswick. One of them is Southwest Energy which has a number of wells in Arkansas. Arkansas has been involved in shale gas for about a decade. We just had a delegation including three ministers and people within government departments and a conservation organization go to Arkansas to look at what is going well, what they have learned over the last decade, what can we learn to do things better, or to deal with issues as they come up.

This was an opportunity for me to sit down with the governor and get his view on shale gas development and what it has done for them, and see if there are ideas for the future if it comes to New Brunswick.

We also talked about their success in changing education results in Arkansas over the past five years and what the priorities were that they focused on.

Q—What was your main takeaway on the shale issue?
A—We are fortunate in New Brunswick that we are on the ground floor. I believe it will be very important to have a robust regulatory regime that provides clarity for developers and at the same time provides clarity and protection for communities and individuals on issues such as water. Quite frankly, the companies we have met with believe that having that clarity makes a lot of sense. That is the main takeaway I’ve had from it – that the opportunity for us is a game-changer – from an economic development point of view – and the importance of doing it in a responsible way.

Q—What was the main piece of advice from Governor Beebe?

A—The clarity in the regulatory regime was an important piece of advice.

A— Exploration is taking place right now. I think we will have a sense of the viability as we go. I believe it will be 3 years before any major development takes place.

Q – Do you have an estimate on the size of the resource in New Brunswick?

A—Not at this point in time. But we believe it could be very significant. But in terms of the projected volume, I am not in a position to say.

Q – What were the main education initiatives in Arkansas that led to results?

A – There were a number of initiatives he was proud of. One was tied to early childhood development, making sure all children in pre-K are ready to learn. That is something we have made a commitment as a government to move forward on. Another was a focus on significantly at-risk children and his focus was on children living in significant poverty. And the third piece was tied to children and students having access to advanced-placement courses.

Q – Other issues you dealt with at the New England Governor’s Association?

A – It’s an opportunity to build relationships. There were officials there from Nova Scotia which will be hosting the Eastern Canadian Premiers’ and Northeast Governors’ conference this July I believe. It was an opportunity to encourage them to come up to Atlantic Canada.

For me as a new premier, it was a chance to touch on the importance of border issues to all of us. I discussed why I believe it’s vitally important that we ensure a secure country for our citizens, but it can’t override the need for us to be able to allow for the movement of goods and services and most importantly people.

New Brunswick is the most export-dependent province in Canada on a per capita basis. Our relationship with New England has been very strong going back to pre-Confederation [days]. The natural trade linkages were north-south, not east-west. That’s something we want to encourage to grow, exports and imports.

Q – What were their top issues they wanted to talk with you?

A—We talked about energy and the potential corridor between Eastern Canada and New England. Electrons flow both ways. That was part of our discussion as a group and individually with Maine Governor Paul LePage as well as in my discussion with Vermont Governor Peter Shumlin. New Brunswick was able to model our efficiency programming after excellent work initiated in Vermont and we took it further than they did. So there was interest in Vermont in what we did.

Vermont has come up with a number of excellent initiative stied to local food production, and we have an opportunity in New Brunswick to learn from that excellent work.

In my meeting with Governor Lepage, we had a chance to talk about the importance of energy to both jurisdictions and the process we are going through right now to develop a ten-year energy policy in New Brunswick. They are starting to work on an energy policy as well. We are a bit ahead of them.

A –There are already corridors where we see transmission between Eastern Canad and New England . We need to in the long term make sure the transmission link is robust to allow for the movement of electrons. We also now have movement of natural gas.  It could involve pipelines or ensuring that pipelines are currently receiving full access. It could be transmission access to pipelines.

For myself as a premier ensuring that our electricity production system is less dependent on foreign oil or heavy fuel in the long term. Having a diversified energy production system, a robust grid where you can access hydro from Quebec or Newfoundland, all those types of opportunities can pay dividends.

We are in the process of refurbishment of a nuclear generation station. Seeing that come on line as well is an example of an opportunity for more clean energy production. That was part of our general discussion.

With Governor LePage we also discussed regulatory regimes. The more common regulatory regimes we have, the more integrated our economies can be. Transportation is an example. There is a pilot project that would see weigh restriction on the Interstate 95 increase from 80,000 to 100,000 lbs. It’s lower than in Canada. It’s less efficient and we believe it makes good sense for both countries to see that increase.

We talked about the opportunity to share some of our joint culture and heritage. Governor LePage is a francophone by birth and it’s important to him. In 2014, the Congrais Mondial Acadien – the World Acadian Congress is going to be jointly hosted by Maine, New Brunswick and a region of Quebec. We also talked about the Bay of Fundy. Nova Scotia and New Brunswick have jointly submitted the Bay of Fundy as one of the new seven natural wonders of the world. The competition started with over 400 entry and is down to 28 finalists, of which only two are from North America – the Bay of Fundy and the Grand Canyon. We talked about the benefits to Maine, which shares the Bay of Fundy, and about encouraging the people of Maine to support this. The voting is taking place all year long and determination will take place in November in this year. I would encourage people to go to Votemyfundy.com or to text 77077 FUNDY (that would cost 25 cents.)

Q—You were born in US, right?

A—My parents are from New Brunswick. My father was attending university in Massachusetts, and I was born in Beverly and lived there six months. I am a dual citizen. After high school in New Brunswick, I went to the US and did my post-secondary education in Tennessee and Illinois.

Q—What took you to Tennessee?

A—A counselling psychology program in late 1970s. Our programs were very experimentally oriented, and I was looking for more practical counseling programs.

Q – While in Washington you also met with Maine Senator Susan Collins. What did you talk about?

A—She certainly raised concerns about regulatory changes for ingredients for making methamphetamines that would need to take place at federal level. I indicated I would take that message back to Canada.

I did speak with her on my belief that while we need to ensure border security, whether for illegal weapons coming in from the US or narcotics coming one way or another.  At the same time, we need to allow movement of goods and service and people. Both our countries are interdependent in many ways. It was a good meeting.

Overall, it was an excellent couple of days, very busy. This summer, New Brunswick is going to be busing hosting a meeting of Southeastern US States and Canadian Provinces – Manitoba and east – at a conference in Fredericton. We’ll have governors and business leaders from different jurisdictions coming together and it will be an opportunity to do commerce and build on strengths each has.