Get to Know… Scotty Greenwood 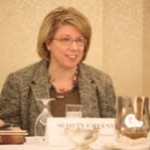 Maryscott “Scotty” Greenwood is a former Chief of Staff at the U.S. Embassy in Ottawa.

She works in McKenna Long & Aldridge’s Washington, DC office as a senior managing director on the International Trade and Public Affairs Teams. She is also a Senior Advisor to the Canadian-American Business Council and a frequent commentator on US/Canadian relations.

What do you actually do in your job? I help companies cope with governments and help governments understand what the private sector really wants.

What is the hardest thing about your job? Not enough hours in the day.

What do you most enjoy about it? Really interesting clients with “bet the company” challenges.

Where were you born and raised? Born in Camp LeJune, NC (semper fi – to all you Marines out there), raised in Arlington, Virginia.

What did you study? I studied skiing, beer drinking and political science in college.

What was your first job and what path led you to your work today? First job out of college was interning for CEO of ‘88 Democratic National Convention in Atlanta.  First job before that was mucking stalls at a riding stables (same skill set for both jobs).

What is the best advice you received in the course of your career? Three things:  (1) Never decline to do a favor for someone’s kid or parent;  (2) Never write anything down that you don’t want on the front page of the Washington Post where your mother can read it;  (3)  What goes around comes around – so be good to people – especially when there is nothing in it for you.

Looking back, what are you most proud of? In life I am most proud of my three awesome kids and remarkable husband.  As for work, I think the coolest thing was playing a small role in helping elect the 42nd President of the United States (in 1992 I was executive director of the Democratic Party of Georgia).

When and how do you start your day? Way too early – wake up call at 4:30 am for my swimmer daughter, followed by large amounts of coffee and NYT, Ipolitics and MorningScore

Blogs or websites you find interesting or useful: anything by chris brogan, also political bulletin and e &e news.

Where are you most likely to be found when you’re not working? hanging over the edge of a pool with a stop watch in hand

If you had an alternative career, what would it be? Olympic equestrian, national geographic videographer or Lady Gaga.

Favorite sports team? Besides whatever team my kids are on at any given time, I cheer for the DC teams – Nationals, Caps, Skins.  I also love anyone who plays against the Yankees.

Who is your hero or heroine? I look up to people who are graceful under pressure.  Some people you have never heard from Georgia politics like Valeria MacPhail who worked for Senator Sam Nunn and the great Mary Rose Taylor who single handedly brought the Margaret Mitchell House to life.  I also admire great American artists like Joel Shapiro, Ellsworth Kelly and a lesser known one – Kelly Wilkinson.

Hobbies? Here comes the Vermont motif – skiing at Jay Peak, summers at Lake Memphramegog, hanging out with Howard Dean, and checking out every new flavor of Ben & Jerry’s …

What is one worthwhile book you read in the past year? Here are two – StartUp Nation by Saul Singer (a gift of AIPAC in advance of our trip to Israel) Obama’s Wars by Bob Woodward (in conjunction with Canadian American Business Council’s event with him in Vancouver)

What is one thing you’d like to learn more about? How it is that Jon Stewart is now the single most influential political commentator alive today (not that that’s a bad thing).

What is one thing you’d like to tell Canadians about the U.S., and/or one thing you’d tell Americans about Canada? Dear Canada – congrats on the Olympic hockey gold. I was at that game and even though I didn’t cheer for you … it was a great game.  Dear US – you better beat Canada next time!